You are now leaving the Stylish with Jenna Lyons blog. The third-party website to which you will be directed to is not an affiliate or subsidiary of HBO Max, and HBO Max bears no responsibility or liability for its content. The Linked Site may have its own terms and privacy policies, which you should review carefully.

The products below were hand-picked by Jenna and are not affiliated or endorsed by HBO Max.

Dean Barger is content that you probably don’t recognize his name. In the pre-pandemic world, when indoor dining was a thing (remember that?), the artist’s well-documented murals likely flooded your Instagram feed. It’s hard to forget works such as the Hubert Robert-inspired landscape behind the bar at Daniel Rose’s Le Coucou in SoHo.

Barger says that it was Le Coucou’s designers, Stephen Alesch and Robin Standefer, who first put him on the map. “I was quietly working on projects in Maine and on the Upper East Side when a junior designer at Roman and Williams introduced us,” he says. Their first collaboration was completed in three weeks.

Barger, who shuttles between Mount Desert Island, Maine, and New York City’s East Village, worked at a similarly fast pace for his first project with Jenna. “We turned it around in four days, possibly five,” he says of the “dreamscape” he created in the foyer of Dana and Dan’s Brooklyn brownstone.

The inspiration borrowed heavily from the Barbizon school style of blurred focus landscapes, a style that’s become a defining feature of Barger’s work. “It’s one of those less-is-more kind of styles,” he says of his well-honed technique. “One overly defined branch throws the whole thing off.”

We check in on the artist in his studio off the coast of Maine.

How did you get your start? Did you always want to be an artist?

I grew up in Ohio, where my mom was a fashion artist, back in the time of pencil work and ink washes, before photography decimated the field. Her father was an architect for Albert Kahn, known as the “Architect of Detroit” back in the Motor City’s heyday. On weekends, my mom would shuttle me off to the wonderful Toledo Museum of Art for lessons.

Later, the local university had all their art classes stationed in the cavernous basement studios of that same museum, so I developed quite an appetite for art while earning my degree, although, admittedly, my natural inclinations were to draw Godzilla and superheroes.

What brought you to Maine?

After working for several years in the buckle of the Rust Belt, I decided I needed a fresh start out East. I was introduced to Maine in the early 1990s, and its salty, craggy coastline resonated with me after decades of living in a very flat part of the country. I discovered a whole group of 19th-century artists that I fell in love with: George Inness, Fitz Henry Lane, Winslow Homer. Their paintings of New England and the Hudson Valley struck me. There’s something elusive about their masterful handling of light and atmosphere.

When I moved to Maine after two decades in New York City, I thought maybe, just maybe, my business might tank. But instead, it tripled, and we’re managing more projects than ever, with a lovely constellation of clients and designers who keep calling us in. 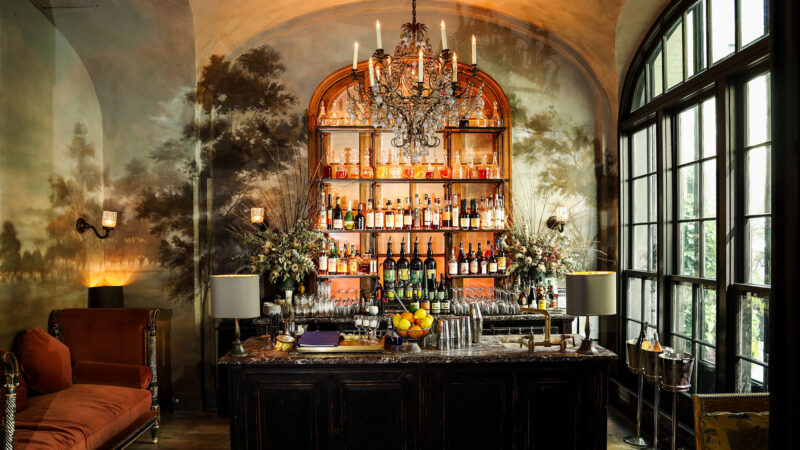 Your work is a mix of residential projects and commercial projects. Can you talk a bit about that? Does one appeal more than the other?

For decades, I worked on private residential commissions with my small group of artist helpers. I’d bounce between my Mount Desert Island, Maine, studio, and the East Village of New York City, where I had my main studio. I enjoyed the challenge of creating projects for talented architects and designers, but I mostly viewed my finishes as a backdrop for a greater design narrative. I still do!

My team is amazing! They’re all wonderful artists in their own right, with decades of wisdom and experience. Each person brings a unique perspective and strength. In my mind, great projects can’t be completed without a magnificent team effort, especially in New York City’s world of tight deadlines and congested project sites. This all came to a head for me as my son was born 10 years ago and my knees started to need multiple surgeries and the demand for my work increased exponentially.

You start your murals with a pale pink base. Why?

Yes, it’s known as the underglow. Most old paintings were painted on a white ground that was toned with color, most often an umber wash, but sometimes it’s a rusty sienna hue. This tends to be the color complement of blue on the color wheel, so having a soft version of this under my sky tends to create an interesting tension so the blue doesn’t seem so out of the tube and simplistic. Instead, it creates a pleasing glow under the mural.

In the end, I work to create a faraway point of infinity, some distant misty part of the mural that draws the viewer into the wall. I like my murals to recede back, dematerializing the space rather than jumping off the wall screaming for attention. 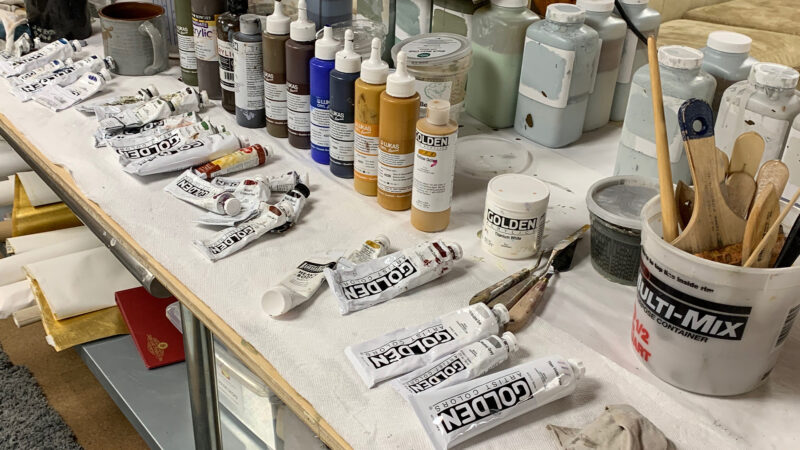 What kind of paints do you use?

We exclusively use water-based paints on our murals, with my favorite brand being Golden Acrylics, mixed with various matte varnishes and a bit o’ spit.

Well, when we work together, we have all sorts of shorthand phrases…fluffing is the use of a massive badger hair softener to gently blur the paint while it’s still in a wet, malleable state. But it always sounds a bit naughty, I suppose …

How much does fine art of the past influence your designs?

I’m happiest when I have a half-day or even an hour to wander a great museum, alone with my thoughts. It’s in these moments that I find what I love, and it tends to change over the years. In the beginning, it was all the Titans: Rembrandt, Michelangelo. Then it was George Inness, Corot, Hudson River School blokes. As I started to grow sick of typical faux finishes, I started looking more at objects and textiles, especially Japanese kimonos and screens.  So for the last 15 years, that’s where my brain tends to go. The great benefit to this is that the Asian Collections of museums tend to be the least crowded and most peaceful, which is great for my introverted nature.

If you weren’t painting, what would you be doing?

Raising my kids in Maine. Wait, that’s what I am doing! I think I’d be an art teacher or coach.  There was a decade where I taught at the New York School of Interior Design, and that was a lot of fun.